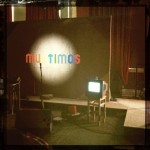 Multimos is a collaborative project and multimedia album created by Bunty. metaLuna has been working on this project to produce the live visual content and short films for the mos releases, a series of 7 individual multimedia packages for download. Multimos stems from a strange make-believe world starring King Zacky and the Third Party Force. The first release features 3 songs and a short film which can be bought here. The short films can be viewed here: Mos 1, Mos 2, Mos 3.